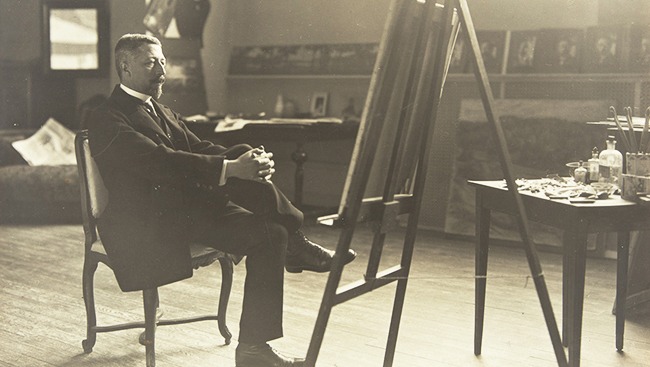 Prince Eugen was born the youngest son of King Oscar II and Queen Sophia. The prince showed early artistic promise which later on would result in a life-long commitment to arts. As a young student in Paris he took his first steps as an art collector, and by the turn of the century, he bought the property at Waldemarsudde where he found the space needed for his own works and the art he collected. Since 1948 Prins Eugens Waldemarsudde has been open to the public as a museum.

Prince Eugen was born on 1 August 1865, the fourth and youngest son of the Duke of Östergötland, later King Oscar II, and Queen Sophia. The prince showed early artistic promise, and received instruction in drawing and painting from various artists while growing up. In 1885–86, he attended Uppsala University while studying concurrently under the painter Wilhelm von Gegerfelt. This was when he decided to become an artist. Initially, his parents had their doubts; painting as a hobby was one thing, as the chief pursuit of a prince of the realm, however, it was quite another.

Ultimately they granted their approval, and Prince Eugen spent the period from 1887 to 1889 in Paris, studying under the French artists Leon Bonnat and Pierre Puvis de Chavannes, among others. Paris was also where he took his first steps as an art collector. In 1889, the prince was made the first honorary member of the Royal Swedish Academy of Fine Arts in Stockholm, and the following year, he was elected to represent the Academy on the National Art Buying Committee. These appointments represented the starting point for a lifelong commitment to arts policy. Following his return to Sweden, Prince Eugen enjoyed an artistic breakthrough moment with lyrical romantic paintings such as Spring (1891) and The Forest (1892).

Inspiration from nature
In 1891, Prince Eugen visited Tyresö, south of Stockholm, for the first time. From 1894 to 1909, Lilla Tyresö, a house on the grounds of Tyresö Palace, was his summer residence. He was inspired by the varied natural surroundings, and deepened and developed his landscape painting. Paintings such as The Cloud (1895 and 1896), Still Waters (1901) and Clearing after Rain (1904) all came to fruition at Tyresö. The prince’s 1890s work was to play a role in the development of Swedish landscape painting.

At the turn of the century, the prince bought the property at Waldemarsudde on the island of Djurgården in Stockholm. He recorded his early impressions of the new residence in charcoal and watercolours, in paintings such as The Garden Oak (1902) and Old Waldemarsudde I (1904). Later, it would be the water with its steamboats and the factories and steam mill across the sound that would capture his interest. Works such as On the Way Out (1906) and Smoke Plumes, Oil Refinery (1907) bear witness to the lyricism of his mood paintings during this period. At Waldemarsudde he could also pursue his interest in gardening, planning the park and garden.

Artistic renewal
In the mid-1910s, Prince Eugen found himself longing for new vistas, and in the open landscapes of the Östergötland plains, he saw a potential for artistic renewal. Eugen was so taken with the area that he had a summer house, Örgården, built in 1915–16 near Vadstena. Here the prince found fresh motifs in the sweeping views of the plains and the play of the heavens over Lake Vättern, resulting in paintings such as Rain at Omberg (1925) and Racing Skies (1930–35). The prince’s painting from this period reflects his experimentation with new idioms: in works like Motif from Dala, Västergötland (1910) and the Djurgården motif Sunspot (1915), he employed a bolder, livelier palette. His later choice of gouache as a medium in, for example, Quarry near Arles (1936) would reflect this eagerness to recreate himself and try new modes of expression. In the 1930s, Eugen spent most of his summers at Österlen in Skåne, visits which gave rise to a rich artistic production, including Kivik Harbour (1931). During the Second World War, Prince Eugen came out against the methods of political violence, taking a stand against Nazism and Communism. The muted tones of Harbour in a State of Emergency, painted just after the outbreak of war in September 1939, can be read as an expression of the general mood. Snowbound Bush was one of several inspired little paintings from Waldemarsudde during the war winter of 1942, bearing witness to the 77 year old artist’s unstinting love of painting.

Commitment to public arts
Like many turn-of-the-century artists, Prince Eugen was also active as a designer. His Waldemarsudde pot is now considered iconic, but the prince also designed chairs and silver jewellery. Over the years, many exhibitions of Prince Eugen’s art have been mounted. The most comprehensive was the retrospective at Liljevalchs Gallery in 1925, which also travelled to Oslo and Helsinki, and which the prince himself took an active hand in preparing. Eugen also helped put together exhibitions of other artists’ work. Together with Hanna and Georg Pauli he arranged the first major exhibition of Ernst Josephson’s work in 1893, and the following year he had a hand in bringing Edvard Munch’s work to Stockholm for the first time.

Another element of his commitment to public arts policy was his monumental painting . With his 12 monumental works, most in public places, the prince saw an opportunity to help make art more accessible. The works can be found in schools, hospitals and churches. The grandest was City by the Water, a mural over 40 metres long in the Prince’s Gallery at Stockholm City Hall (1916–22). Prince Eugen not only took part in the artistic life, he was involved with many cultural associations, committees and organisations. For example, he was a member of the Swedish Adult Education Association for 35 years, and was chairman of the Swedish Handicrafts Association from its founding in 1899 until the time of his death.

On 17 August 1947, Prince Eugen died at Waldemarsudde, 82 years old. He bequeathed his home and his collections to the Swedish state along with a donation of shares to help cover their upkeep. The bequest included buildings, gardens, furniture, handicrafts and extensive collections of art. These include some 3,200 works by the prince himself, and some 3,500 works by almost 450 (primarily Swedish) artists. Following renovation and rebuilding, Prins Eugens Waldemarsudde opened to the public as a museum in summer 1948. From July 1 rst 2017 Prins Eugens Waldemarsudde will be an independent Foundation with government grants. 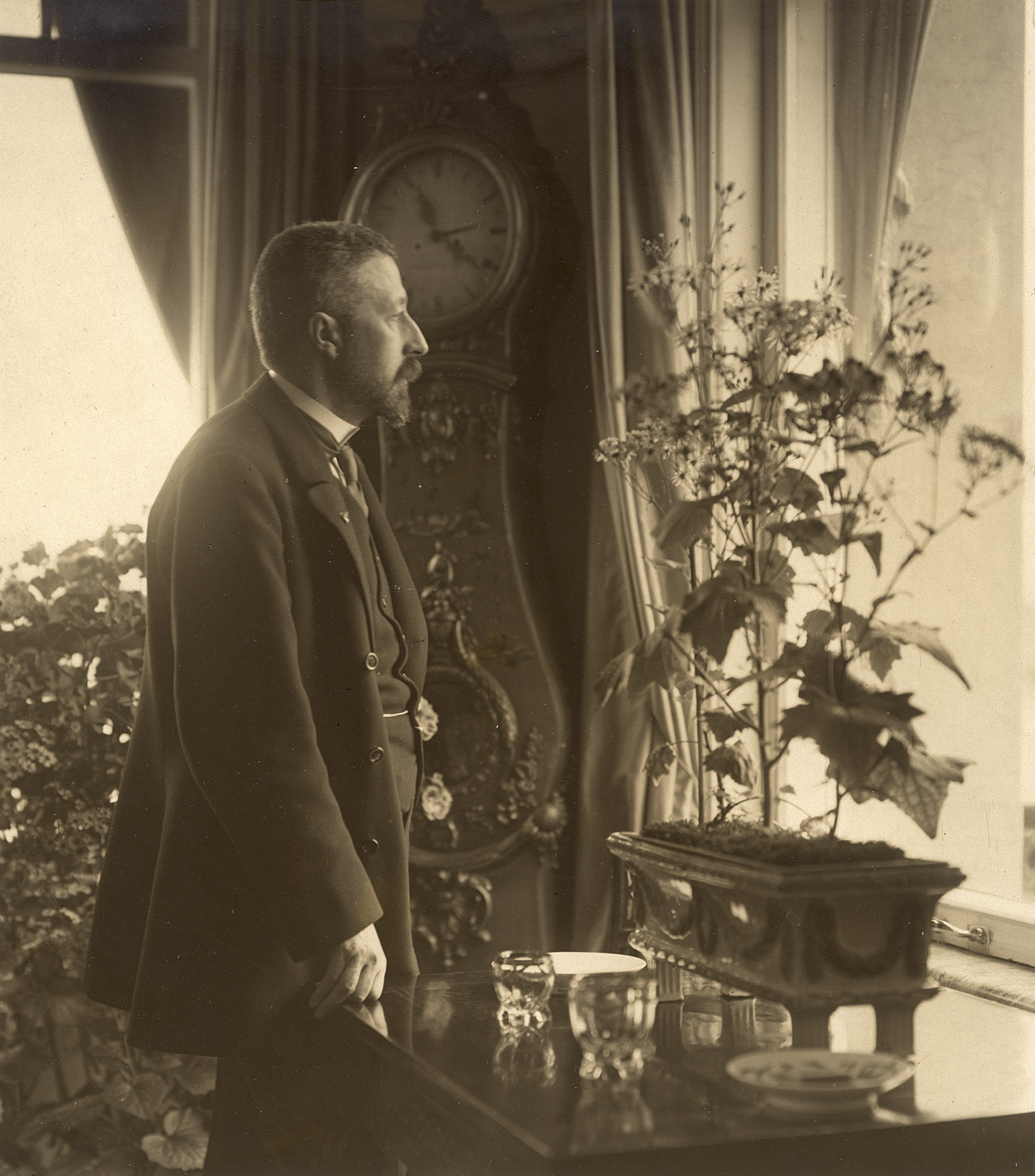